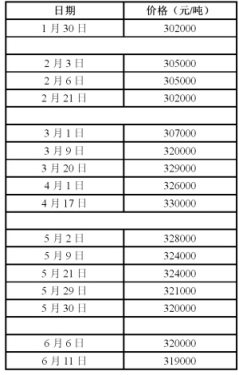 Domestic 3A-class commodity seizures price trend in this year (New City) chart analysis: After January 30th, the price rose slightly to the February 3rd volatility callback; after February 21, prices rose. . From March 1st onwards, the price was again pulled back; in mid-April, the price of reeling silk reached the highest level after reaching the new city, surpassing 330000 yuan/ton, and then declined; at the end of May, the price of reeling thread had fallen to less than 320000 yuan/ton, The market continued to be weak and the market outlook was bearish. After entering June, the silk market continued to consolidate.

Recently, two sets of CCTV broadcast half an hour in the economy, "The Silkworm Dilemma in Guangxi, the Missing Link of Eastern Sangxi Migration," and the prices provided by silkworm farmers and related parties in the program show that the price of Guangxi Spring Clam was at a high price of 21 yuan/kg at the time. 17 yuan/jin. In addition, comparison of raw silk data shows that in the past two years, the highest level of raw silk was 420,000 yuan/ton in 2011, and the current price was 31 million yuan/ton. This concludes that in the past two years, the prices of silk reels have been in a state of severe weakness, and that East Sangxi's move has been blocked.

CCTV's program was originally intended to promote the healthy development of the silk market. However, after that date, the already weak silk market continued to fall again, and the spot market fell to 320,000 yuan/ton. The main force of the stock market in September was next year. March contracts fell below 31 million yuan/ton. At the end of May, the silk market seems to be back to the low period of the beginning of the year.

"Prices are indeed falling, not to mention 21 yuan/kg, even if it is 17 yuan/jin, we are all happy. However, the actual transaction situation is not so optimistic." A Tongxiang silkworm farmers said. The Spring Breeze in Zhejiang Province also began to be acquired in the near future. Prior to this, the Guangxi area had already become two batches, and the initial purchase price was basically above 18 yuan/kg. Therefore, when the price of the new price of 15 yuan/kg was issued by Zhejiang Xinyi, it attracted many saliva. The price of western silkworm farmers shouted too much. However, according to the author's discussion with the silk enterprises, the price of Xinyi should be in the range of RMB 15 to RMB 18/kg, the low level should not be RMB 12/kg, and the low price should hurt the farmers. If the high level breaks through 20 yuan/jin, it will have a fatal impact on the downstream and long-term markets, which has been confirmed in 2011.

From this point of view, the new price at this stage is actually reasonable. At this stage, the market for lice is still in a weak correction, which is obviously unfavorable for silkworm farmers. As for the downstream raw silk, some companies proposed that last year, the reasonable price of silk yarn should be between 300,000 yuan/ton and 330,000 yuan/ton in the current period. After all, the cost of the company is rising.

Why is the silk market so controversial in the past two years? The most important reason is that price fluctuations are excessive. Far from saying anything, this year's point of view, the reeling spot market experienced a lot of turbulence. From the price of 300,000 yuan per ton in the new city at the beginning of the year, it exceeded 330,000 yuan per ton in early April. Each reeling man was worried. However, after entering mid-April, the reeling price began to fall sharply. On June 12, the average spot price of the domestic 3A-class inspection thread fell to 315,000 yuan per ton.

Comparing the prices of the new city at the beginning and the current price, it is not difficult to find that the overall price of the reeling wire is still rising during the year, but it is worth noting that the current price of 315,000 yuan/ton does not seem to be the bottom price. Judging from the reeling price trend, the price curve is still in a downward trend, and the market is accelerating the weak consolidation.

Since the beginning of mid-April, the price has continued to linger until recently, and the market has tried several times to bottom out. Before the relevant people believe that 32 million yuan / ton is a node, the market price is likely to stabilize at 32 million yuan / ton, the result is counterproductive, just after the CCTV program coverage, the decline will appear again, only a few In days, the overall average price was almost equal to 31 million yuan/ton.

The decline in the prices of silk reels is the first straight decline since the new market, and the duration of the reeling has exceeded one month. What is even more serious is that the current downtrend remains unchanged. Looking at the fall of this period, there are several reasons: First, the new one. During this period of price drop, Xinyiâ€™s influence was the first to bear the brunt. In the early period, Xinyi in Guangxi was the first to go public and the high price was once close to RMB 20/kg. When Xinyi was just listed, it really added a fire to the silk market. The new quality is good, the material is expensive, and the market supports. As a result, the price of raw silk at the time also rose by a small margin. However, soon after, along with the batch listing of Xinyi in Guangxi Province, the quality of enamel declined, and the quantity increased rapidly. As a result, the purchase price of Xinyi quickly fell, and the price of raw silk began to decline. The second is consumption. Affected by European and American economies, silk consumption has not been warm in the past two years. This is because silk is a high-end product, and silk products exported by China are mostly consumed by European and American developed countries, while economic contraction restricts its consumption, and domestic consumption has not improved. This has constrained the development of the domestic silk industry, which is also the crux of the silk market which has been weakening since last year's decline. The third is the recent economic factors. May was a turbulent month. Under the influence of Xinyi, the silk market had a weak correction. In May, the euro zone crisis spreads that Greece will withdraw from the euro zone. These external macro factors will quickly affect the international market. However, the domestic bulk market has also been severely affected. In May, the bulk commodities market was almost all weaker. This has been aggravated by the reeling silk market. Therefore, since late May, the silk reel market has once again become in the quagmire and has begun to â€œfallâ€.

Judging from the recent market conditions, the silk screen market is still not optimistic. In the short term, prices may continue to be weak. Looking at the Spring Festival in the upper reaches, on the current price system, the guiding price of silkworm cocoon in Zhejiang may be a reasonable price. However, in order to reproduce the splendor of the silk industry, in the absence of foreign consumption, stimulating domestic consumption should be said to be the best direction for development.

Our company, Shijiazhuang Guangda Textile Co., Ltd usually weaves the cotton tea towel from 150gsm to 300gsm, in 45x70cm, 50x70cm, 60x80cm and 50x100cm; other sizes are also makable. These cotton tea towels are use for kitchen, hotel, airplane and supermarket promotion. We put the tea towels 1 dozen in a poly bag, then 300pcs into a bale.