If the T100 wants to maintain rapid growth in the fierce competition in which all brands are trying to enter the children's wear, what must be done is to take a refined and professional path. The T100 was first born in the United States. After returning to the United States and examining the US children's wear market, Dong Wenmei is more confident in the US market. 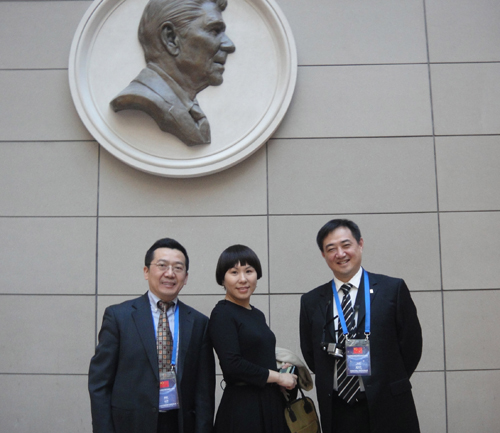 T100 Chairman Dong Wenmei and members of the delegation

Going out to draw on leading-edge thinking and patterns

On February 11th, Vice President Xi Jinping visited the United States, Ireland, and Turkey. Dong Wenmei, Chairman of T100 Children's Wear, and Yang Yuanqing, Chairman and CEO of Lenovo Group; Lu Guanqiu, Chairman of Wanxiang Group; Liang Wengen, Chairman of Sany Heavy Industry, etc. The Chinese entrepreneurs were among the invited guests. Dong Wenmei, as a representative of outstanding costume entrepreneurs, travelled to the United States with the economic and trade delegation led by Chairman Xi and participated in the Sino-U.S. economic and trade forum for exchanges and cooperation negotiations. It lasted 12 days and was accompanied by delegations on February 23. return.

The delegation led by Chairman Xi paid a visit to the United States to participate in the exchange and cooperation talks between the China-US trade and economic forum.

During his visit to the United States, Dong Wenmei exchanged in-depth discussions with more than 100 outstanding entrepreneurs from all walks of life in the delegation, learning from them unique business ideas and advanced thinking models, and learning from them that the company will become bigger and stronger. The successful experience, while not forgetting to introduce them to the T100 children's wear, hopes that they understand this children's wear brand and offer valuable opinions on all aspects of the T100. What makes Dong Wenmei happy is that many entrepreneurs are not only loyal consumers of the T100, but also are very optimistic about the brand and have made very good suggestions on the development of the brand. In the more than ten days spent with these top Chinese entrepreneurs and even the top players in the industry, Dong Wenmei thought that he was too valued and learned from them a lot of unique ways of thinking that his company hadn't learned in the last ten years. For example, a large number of Chinese companies acquire US companies. An entrepreneur from Chinaâ€™s high-tech industry has acquired a high-tech nuclear medicine R&D company in the United States that specializes in cancer issues. The company has been developing cancer research for 30 years, and more than 40 R&D staff from more than 20 companies. At the age of entering this company, he has devoted himself to research. He has worked for a subject for 30 years and is now in his fifties. It is during the prime time of scientific research that Chinese entrepreneurs have made heavy fist purchases. The companyâ€™s R&D strength is not the asset strength of American companies. This move allows Dong Wenmei to understand what a real core competitiveness of a company is!

Summarizing the ten years of growth in T100 children's wear, several key strategies have led to a 300% increase in sales performance for consecutive years. Starting in 2008, the T100 has launched special counters at major airports in Beijing, including Beijing Capital International Airport, Shanghai Pudong Airport, Guangzhou Baiyun Airport, Shenzhen Airport, Chengdu Airport and Qingdao Airport. Many consumers have discovered that they have a T100 children's clothing. From the opportunity to become a T100 customer, so T100's personalized marketing directly locked themselves in the high-end children's wear brand. T100 not only has many stores in the country's major airports, but also quickly emerged in the past two years. The major high-end shopping centers in the country's major garment centers also occupy an important position, one step into the ranks of high-end children's wear; main "family-children" to fill the market The blank is even more call for family care and harmony. Family affection marketing is the key to success.

During the visit of President Xi to the United States, Dong Wenmei continued to seek advice from Chinese entrepreneurs on behalf of his success, and he received the experience of successful companies in his own company. At the same time, in the Sino-U.S. economic and trade forum, he repeatedly talked to American counterparts. The family exchanged and asked them to see if the clothes they brought were suitable for American consumption, what needs improvement, and so on. Dong Wenmei described his visit to the United States as Tang Shengshi took the Bible! After returning home, Dong Wenmei will work with the board members to make strategic adjustments, that is: increase the talent pool; introduce high-end consultant team and excellent shareholders, let T100 go abroad as soon as possible, rooted in China, to the world!