For the history of Chinese jade development, Tang and Song jade can be said to have opened a new chapter. Beginning with the Tang Dynasty, with the transformation of historical background and the culture and art of Central Asia and West Asia entering the Central Plains region, jade gradually faded away from the mysterious and sacred aura and entered the homes of ordinary people. In the Song Dynasty, due to the rapid development of the urban economy and the rise of the citizen class, the process of commercialization and secularization of jade articles was accelerating. In some big cities, â€œJadeâ€ appeared, and jade workshops were combined with jewelry stores to form the traditional model of Chinese folk jade processing and sales of â€œbefore-stores and factoriesâ€. At that time, Hangzhou â€œQibao Societyâ€ was a typical example.

Then, what are the artistic styles of the Tang and Song dynasties? What kind of height does the craft level reach? What role did jade play in the social fashion of the time? Zhang Wei, a researcher at the Shanghai Museum and a vice president of the Jadeware Professional Committee of the Chinese Cultural Relics Society, accepted an exclusive interview with the newspaper to conduct a detailed analysis. 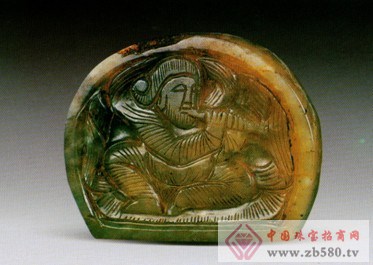 Due to the short-lived shackles of the Sui Dynasty, only a few pieces of white jade cups, jade plaques, etc., which were unearthed from the tomb of Li Jingxun, are difficult to see from the overall real face. The Tang and Song dynasties lasted for more than 600 years, and the jade articles have been relatively popular so far, fully demonstrating this. The basic changes in jade during the turning period. Zhang Wei said that after the Tang and Song Dynasties, jade articles were more secular, folk, and commercial.

Zhang Wei said: "The jade articles before the Tang and Song Dynasties, as the carrier of the ritual system, symbolize the status of the identity, so the shape is relatively simple, and can not be innovative as desired. The categories are Yuxi, Yuxi, Yugui, Yuxi , jade axe, jade, jade knife and jade, jade, jade ring, jade belt hook, etc.; the ornamentation is mainly symbolic abstract geometric lines, such as moirÃ©, grain, and peg; There are also characters and animals, but the expressions are exaggerated, distorted, and have stylized features. Tang and Song jade began to appear in the wild, a large part of which went to the folk, ceremonial utensils gradually decreased, and pure accessories and decorative objects became mainstream. Although Yushu and so on are still used to worship the heavens, they continue to play the role of rituals, but the shape is small, and the decorative lines are bold and new.

"Because the jade has been secularized, the pattern has to express a certain meaning, to please a good color, and to be loved by the people. The so-called 'picture must be intentional, meaning will be auspicious'." Zhang Wei said that when the deer was seen in the Northern and Southern Dynasties, it was regarded as "The beast of pure goodness", "Rui Yingtu": "The king inherits the first law, and nothing is lost, then the white deer comes." The deer is the same as the "Lu" of Guan Lu, so the later generations are often in the performance of the pattern. Bat (Imperial Fu), Xian Weng (Yi Yi Shou) is combined in one place, indicating "Fu Lu Shou". The early jade deer was seen in Shang and Xi Zhou, and since then, the jade deer has been rarely seen until the Tang Dynasty. After the Tang Dynasty, the works of Yulu increased greatly. When it was combined with the meaning of "Lu" and the deer, it was a vivid manifestation of the secularization of jade articles after the Tang and Song Dynasties; and the image was also a traditional auspicious theme, "Rui Yingtu": "The King's Political Education In the Quartet, the white elephant is up." The saying goes "Tai Ping has an image." Yuxiang was first seen in the Yinxu Women's Tomb, but it was only slightly more common after the Tang and Song Dynasties.

In short, the Tang and Song jade articles that have completely gone down the altar, the auspicious patterns are in the air, the influence is long and today.

The geometric lines of the Tang and Song jade that went to the folks retreated to a secondary position. The life was strong and the randomness was stronger. Therefore, the reality of the subject rose to the mainstream, and a lot of things in daily life were introduced. Plants and flowers were very common. This is in Tang. The jade artifacts before the Song Dynasty could not be seen. Characters (ä¼Žä¹, é£žå¤©), animals (fowls, beasts), etc. also emphasize the realism, injecting a rich life atmosphere into the jade.

In terms of the secularization of jade objects, Zhang Wei believes that the long-term development of animal-shaped jade articles in the Tang and Song Dynasties can be described as representative. "Animal jade ornaments are one of the important categories in ancient jade. They mainly refer to realistic Xiaosheng animals. Prehistoric has seen clues, red mountains, Liangzhu, Shijiahe and other Neolithic cultures have been found, such as birds, Eagles, fish, frogs, tigers, etc. Shang Zhouyu's animal species expanded and the number increased. Only the Yinxu women's tombs were unearthed more than 100 pieces. The two Han jade animals continued to be produced. The animal-shaped jade ornaments of the Tang and Song Dynasties not only styling and Han before the attention Formal and abstract decorative styles are different, and they are greatly expanded in terms of function.â€ For example, there are more than 20 pieces of Song Dynasty jade animals in the Shanghai Museum, such as birds, peacocks, chickens, geese, pelicans, and fish. Tigers, elephants, horses, deer, dogs, rabbits, etc., represent the popular varieties at that time, and their uses are mainly decorative. "Flying birds are the most common in the Song Dynasty. One of the great development backgrounds at that time was naturally the prosperity of the Song and Song Dynasties paintings in the Song Dynasty. The aesthetic taste of the literati was more or less revealed on the jade birds. The Song Dynasty's poultry style is both beautiful and elegant. The refraction of the style of the times that permeated the two Song dynasties was also a reflection of the strong infiltration of flowers and birds in the Song Dynasty."

The shape of the dragon of the later generations has been fixed in the Tang Dynasty. In the Northern Song Dynasty, Guo Ruoxuâ€™s "The Picture Sees the Wings" puts forward the "Nine Likes" of the dragon: "The horn is like a deer, the head is like a camel, the eye is like a ghost, the item is like a snake, the belly Like cockroaches, scales like fish, claws like eagle, palms like tigers, ears like cows." This has been basically reflected in Tang Long, which has a great impact on the future dragons.

Although the Tang and Song jade articles show their new faces in the history of Chinese jade, Zhang Wei clearly pointed out that the jade styles of the two periods are very different, which is directly related to the background of the times.

The Tang Dynasty was relatively strong, and exchanges between China and foreign countries were frequent. This social style gave the Tang Dynasty a kind of heroic and heroic style, which was also evident in the jade. The Song Dynasty did not completely unify the country, and the nomads in the north invaded from time to time. Xixia, Liao, and Jinhu are ashamed, so the jade is weaker in bone strength than the Tang Dynasty jade. At the same time, due to the prosperous culture at that time, the literati doctors led the social trend, and the jade was also affected as a whole, which was more delicate and restrained. "The Qing Emperor Qianlong was the finest in the jade crafts of the Qing Dynasty, and the second was probably Song Gonggong. The practice of the skin-colored and delicate carvings has appeared in the Shang Dynasty. After the Song Dynasty, it appeared in large numbers, and it became the appreciation of the jade at that time. A reference standard, which also reflects the Song people advocating nature, the pursuit of return to nature.

Tang and Song dynasties are rare and rare.

After the Tang and Song dynasties completely walked down the ceremonial altar, its position of high and high seems to be gradually lost. Zhang Wei said that compared with gold and silverware and porcelain, the scale and quantity of Tang and Song jade are not too large. "The gold and silver wares of the Tang Dynasty are more developed than the jade. It is estimated that this is closely related to the prosperity of Buddhism. Gold and silver are the highest grade offerings for Buddhist worshippers to worship Buddhas. Many gold and silver wares discovered by Famen Temple were used by the emperors to worship the Buddha. As a result, the whole society is more advocating gold and silverware. Therefore, some of the motifs and forms of jade are also borrowed from gold and silverware; in the Song Dynasty, porcelain was very popular, and the five famous kiln were very famous at that time. Song Huizong The love of porcelain has also been passed down from generation to generation. Therefore, some of the styles and patterns of jade articles in the Song Dynasty were also influenced by porcelain. Jade articles were not recorded in the classics at that time, because it is not like bronzes, it has always been a national weapon, not like paintings. In the same way, it was highly praised by many literati. In the Tang and Song Dynasties, jade articles were only treated as crafts, used to beautify life, and the degree of attention was not enough.

Of course, the quality and quantity of Tang and Song jade are limited, and the source of jade is unstable. "There is basically a consensus in the academic world. From the Han Dynasty, the jade material mainly came from Hetian jade in Xinjiang. But until the Qianlong period, the jade material entered the Central Plains through trade, tribute, etc., and the limitations were relatively large: first, there was no guarantee. How many jade materials are there? How can the jade material be guaranteed? Secondly, we can see that the jade articles before the Qing Dynasty, many jade materials are not very good. Although Song Huizong also likes jade, the clothes have jade belts, music There is a jade, and there are Yugui and Yushu in the ritual. The jade workshop is also set up in the inner court, which is called 'Wensiyuan'. But he can't do as much as he wants like the Emperor Qianlong. Officials from Xinjiang have been overseeing and picking and picking," Zhang said.

Therefore, there are not many Tang and Song jade artifacts unearthed now. It is known that there are many small pieces of unearthed works, and there are few large pieces. The number of handed down products is not too much compared to other times.

We hold one of the best positions in market by manufacturing, and supplying Nap-cloth Slipper successfully to our clients. Designed for short term use, are a great favourite with Beauty Salons and Spas and Massage Parlours.Colour: White Size: One-size-fits-all .Designed for Single use but still ideal For: Fish Spa Slippers, Guest Slippers, Spa Slippers, Airline Slippers, Health Club Slippers, Health Farm Slippers, Hospital Slippers, Disposable Slippers, Single Use Slippers.Mainly use at hotel, beauty salon/SPA/sauna places.